With the Beast From the East hopefully behind us (fingers and toes crossed), Faye Chambers gives us a reason to embrace Spring and venture out to the West Yorkshire town of Halifax. Currently in the midst of a cultural revolution, the Calderdale hot spot is reinforcing that it’s not so grim up North!

It’s Monday morning. It’s chucking it down. Your bus is seemingly crawling at two miles an hour through the traffic, and on your left is the sewerage works. Then you see the sign, ‘Welcome to Halifax’, and below that, the oh-so-original £40,000 slogan ‘Pretty Gritty’ – well, you can imagine the graffiti…

So, with this less than idyllic approach in mind, you could be forgiven for arriving in Halifax with low expectations. For anticipating finding yourself in a ‘Gritty’ northern industrial town, run down and forgotten along with the mills which once fuelled its economy.

But over the last couple of years this bleak archetype has been rewriting itself. Change is brewing across Halifax faster than the finest cup of Yorkshire tea. A rogue micropub appeared one day, a throwback 50’s style milk bar the next. Now boasting three theatres, a constantly sold-out music venue The Lantern and the glass topped Westgate Shopping Arcade, Halifax has a flourishing retail and social scene evocative of Manchester’s trendy Northern quarter.

At the centre of this cultural explosion, and perhaps the catalyst for continued growth, is last year’s 19-million-pound regeneration of the iconic Piece Hall. This Grade 1 listed building was the home to weavers trading cloth ‘pieces’ from 1779, and throughout the 19th and 20th century the units were developed into retail spaces. Following a decline in trade, the hall closed in 2014 for 3 years of redevelopment. The funding, awarded by the National Lottery, also enabled the renovation of Square Chapel Arts Centre and the building of a modern glass Library. The site reopened on August 1st 2017 – Yorkshire day, of course. 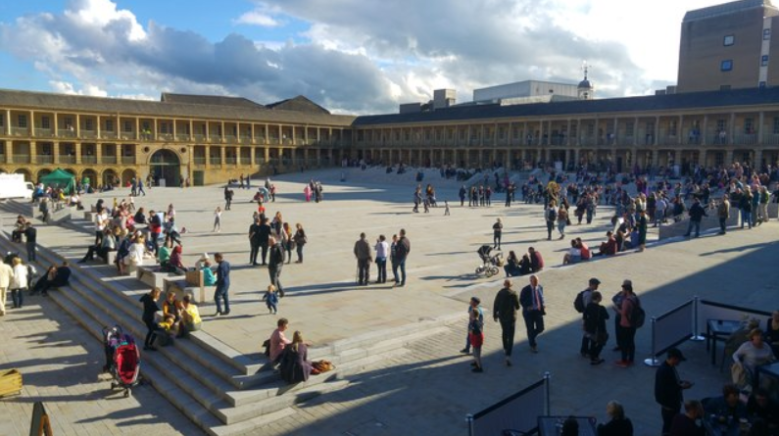 Now 6 months into the project, The Guardian has dubbed the town the ‘Shoreditch of the North‘, a title which Executive Director of the Piece Hall Trust Nicky Chance-Thompson welcomed. And with high profile visitors such as Andrew Lloyd Webber, Grayson Perry and, most recently, Prince Charles and Camilla, it’s not hard to see why. Perry took to twitter to say it was ‘A Handsome Town’ and that the Piece Hall was ‘A Surprise; Almost French in its Grandeur’. You have to wonder if that was in the designer’s mind when building a cloth hall almost 250 years ago – there are no plans left in existence, and the identity of the original architect remains a mystery.

The units are now filled with an eclectic mix of independent retailers, food and drink outlets and educational heritage sites. There may not be a cereal café just yet, but there is Loafers Vinyl shop-cum-coffee house, and Gin Lane, a boutique bar offering over 60 gins (including 11 Yorkshire-made gins), as well as Jitterbug Jean’s rockabilly clothing store to get your hipster teeth into. And what’s more, many of the town’s successful independents are run by women.

On the cloth hall’s first floor, with a stunning view of the courtyard, is Jewella, a shop showcasing gorgeous jewellery from designers across the UK. Owner and local girl Rose started the business online, but saw the refurbishment of the Piece Hall as the “perfect opportunity” to make a permanent base for her company.

“The feedback is all so positive about the Piece Hall, and the shop is always busy!”

Rose tells me that as a proud Halifax girl she has seen a massive change in the town recently.

“It’s [the redevelopment] rejuvenated the town centre and brought in lots more people. Lots of people have come to the town who wouldn’t have considered coming to Halifax for a day out before. Halifax is up and coming at the moment, there’s a real buzz about the town.”

The rest of the town has plenty to say for itself too. The thriving Borough Market is home to ladies serving up amazing street food such as ‘Thai Corner’ and ‘Babushka’ Russian Café, and in the Town Hall Quarter’s Crossley house is an Italian kitchen, cosy pub, and Guitar/Cafezone, providing the perfect union of Guitars and coffee.

The town’s growth as a cultural hub is only set to continue over the coming year, with the Piece Hall playing host to a Tour de Yorkshire stage, The Antiques Roadshow, and a music festival headlined by Maryland’s own ‘Father John Misty’. The festival will also feature support from Edwyn Collins and Frightened Rabbit, as well as local talent Hookworms and female fronted 3-piece The Orielles – Calderdale’s own answer to Sonic Youth.

As of now there are retail and restaurant units still available for rent in the Piece Hall, although they won’t stay empty for long, with the official site saying the spaces to let are “filling up fast”. So, whether you’re looking to kick-start your dream career as a purveyor of organic moustache wax, or just someone looking to shop local, look no further: Halifax is just the place for you. 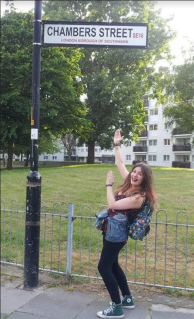 Faye Chambers is a 23 year old writer, musician and linguist from Elland, West Yorkshire. Her debut short story publication ‘Michael, 38’ appeared in the 2017 Grist anthology ‘I, You, He, She, It’ and she is currently studying for a PHD in the Language of Humour at The University of Huddersfield. In between lurking in guitar shops and investigating dirty jokes you can find her at afayewithwords.wordpress.com